FIFA 18 Wishlist – Which Change Do You Want to See

FIFA 17 has new additions, which are appealing. But there are also game issues. It turns out it can not satisfy all gamers. Now share your ideas for FIFA 18 here, write about the things that you believe were missing in FIFA 17 and changes you want to see in FIFA 18 Wishlist below. 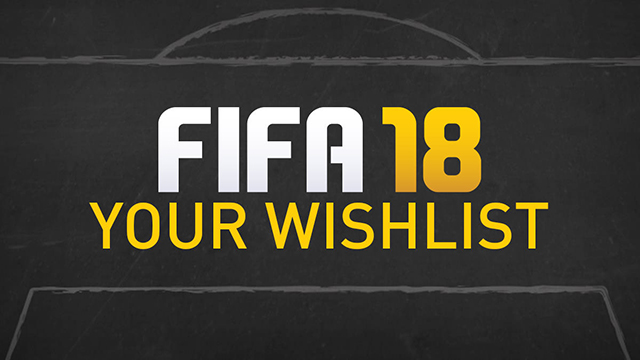 45 is too little to cover, and even so the focus is too much on Europe and South America. There are hardly any teams from other continents to go around (and even there are some leagues whose national team isn’t even represented in the game, which truly is a waste of database pooling). We’ll be having the World Cup next year, no need to cram all national teams like in the official WC game, but a healthy number of them wouldn’t hurt so the WC Qualifiers in Career Mode would be more comprehensive.

More modes like Chairman Mode, which enable you to hire and fire your managers, make player decisions, renovate your stadiums, chenge the ticket and kit price, etc. This is kind similar to Manager Mode. It would be nice to bring back assistants, a complete reformulation of manager mode, something like nba2k, the deepest career mode available in any sports game, with the possibility to train the whole team and not focus on only 5 for week, redesign the team selection screen, assemble the team.

1.More top managers should be added to the game with their face scanned.
2. AI Managers can be sacked from their clubs if they fail objectives and go to different teams.
3. Players that are retiring at the end of the season become managers. e.g Totti after retirement becomes manager of a random Serie B.
4.Managers have ratings and potential. e.g Mourinho 90/95 and Koeman 85/90. AI teams can sign managers depending on rating.

1.Add Youth leagues, a basic league of teams from your league playing only the youth. When you sign a youth player you can assign them to the youth squad instead of them staying in your reserves.
2.More Youth scouts instead of only 3.
3.Assign two scouts to more than one country.

I been thinking that why certain of boots in fifa 17 look like garder boot.Example Nike hypervenom Rooney wear in fifa 17, its tickle me when i look at that boot its so not real and not 100% or 50% similar to the real one.For boot, i can give credit to PES 17.

……Of course, there are still many other things gamers want. Which change do you want to see in FIFA 18? Write your ideas in comment section below.